Beagle Radio was setup in 2014 by a group of people in Whangārei who listen to a lot of music, who like radio and who felt that commercial radio here was hurting our ears and minds.

We did a bunch of reading and then bought, borrowed and begged the gear we needed to start a lower power FM community radio station (thanks Buddhi for our first transmitter and aerial). We started broadcasting upstairs at The Woodshed on Riverside Drive, Trent (you bloody legend) built our website which Big Fish Creative hosted for us and Chris Anderson (Level) designed all the logos. After a year we moved to our new studio at ONEONESIX on Bank Street, Whangārei where we are the noisy little flatmates of the amazing theatre co-op Company of Giants.

After a year we moved to our new studio at ONEONESIX on Bank Street, Whangārei where we’re the noisy little flatmates of the amazing theatre co-op Company of Giants.

Beagle Radio DJs can play and say what they want. You won’t hear any ads (we run on DJ contributions and fundraising). You will hear amazing and sometimes weird music you might not have have heard before. You’ll also hear DJs who can talk knowledgeably about the music they play and why it makes them happy. We try and talk to local community peeps who we like and who we reckon are doing important and interesting things in Whangārei.

Our FM frequency is 88.1…but driving north you’ll lose us around the public bar of the KT because by law a low power FM station can only have a 1 watt transmitter. You can hear us a little further heading south but if you want to get an uninterrupted earful of Beagle then listen to us online here. We stream 24/7 and have an amazing playlist that churns out epic tunes when there aren’t any DJs on air.

Our original playlist was impeccably curated by Richard Holland and his Monday evening show No Future Til Now is still available in our Podcasts. Richard also laid out the studio, labelled cables, kept things ordered and provided wise counsel when we couldn’t agree on things. Matt Keene was the powerhouse behind Beagle Radio – without him it’s possible we would never have got off the ground and into the airwaves! Ngā mihi nui to the following founders and studio builders: Richard, Damian, Chris, Jamie, Spider, Dave, Walt, Greg, Udit, Carrie, Paul, Bart, Mike and Rach for the many hours of fun creating this great music space. So many more people have contributed over the years and continue to do so today.

Currently awesome DJs Night Rider and The SheBear (Sunday Night Rider) have taken the leash and are running the station. If you’re keen to get involved or have your own show get in touch. We have DJs ranging in age from 9 to 60 something and we’re always looking for more so if you want to get on the air, have a read of our DJ agreement and then send us an email.

You can come in to the studio and see what’s involved in doing your own show – the tech stuff is pretty easy and it really doesn’t matter if you make a stuff up because we don’t have any advertisers and none of us care too much for pro DJ patter. 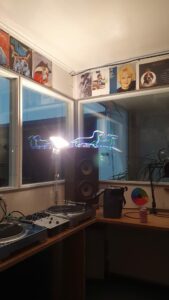 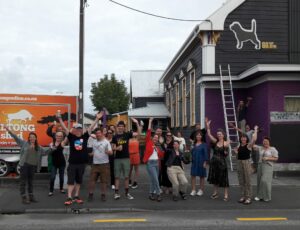 1. Jamie spinning vinyl at the Record Fair at ONEONESIX. 2. Inside the studio at night. 3. “The Hoisting of the Sign” – Beagle Radio Dog gets unveiled at ONEONESIX with the help of our DJs.

Providing a community voice.Beagle fm is a small community focused local radio station, where enthusiasts have the opportunity to share their love of music to a growing audience.